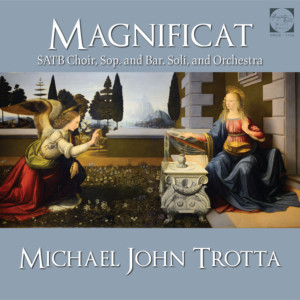 Magnificat CD is a 40-minute work for choir, soprano and bass soli, and orchestra. This seven-movement work delivers a tapestry of melodic richness that powerfully portrays the anticipation of the wonder and mystery of the birth of a savior.

Magnificat CD was commissioned by a consortium of 7 choirs for simultaneous nationwide premieres during the 2019-2020 season:

A Magnificat is a setting of the Song of Mary as found in the Gospel of Luke (1:46-55) – what the King James Version in 1611 translated as “My Soul Doth Magnify the Lord” (the New International Version updates “magnifies” to “glorifies” if that helps clarify). As a Biblical passage these words have been set by perhaps thousands of times by composers over the centuries; anonymous settings date all the way back to the fifteenth century, and many composers have set them more than once. Part of its appeal might stem from its daily use: Roman Catholics would use this prayer each evening as part of their Vespers services, and the Anglican service of Evensong continues that tradition. Settings by Bach, Vivaldi, and more recently by John Rutter are perhaps the most famous, although Monteverdi and Mozart wrote Vespers that are very well known as well. Trotta’s seven-movement concertized version is an uplifting, 40-minute work for soprano and baritone soloists, choir and orchestra.

The exuberant opening movement is a stately march in ABA form, with a short introduction on the title word – remember this music, because you will hear it again later, and not just as the coda to this movement. With its ever-present rhythmic drive, you might find the first movement of Trotta’s Magnificat to be reminiscent of the 7th movement of Vivaldi’s Gloria, “Domine Fili Unigenite” in its strong triple meter – except here Trotta is in a strong Duple. The French horn first introduces the opening theme, a majestic ascending fourth on a dotted rhythm, and the choir soon joins in octaves: “Magnificat!”. The second, contrasting theme – lyrical instead of angular – is an ascending scale of alternating half and quarter notes, introduced by the orchestra, returning again with the choir on the words “et exultavit.” These are in fact the two main themes, not just of this movement, but of the entire work. Notice too, the reverence with which the composer sets the word “Dominum” (Lord), sung by the choir accompanied only by woodwinds, as if there were a halo around this word; this is evocative of how Bach used the strings in his St. Matthew Passion. The relentless forward motion of this movement is infectious, the music happily expressing the joy of the text: our spirits rejoice!

After the lively first movement, we settle into a slower, more calm setting. The oboe introduces the lyrical scalar theme from the first movement over a rolling harp accompaniment and shimmering strings (with overtones!), and the soloist sings the same material. Also in ABA form, as the opening lyrics return at the end, this short movement is sweet and full of reverence.

The “Ave Rose Sine Spina” text is not part of the Magnificat itself, but a six-verse Latin poem based on the Ave Maria (each of its verses start with a word from that salutary prayer). Trotta does not set every word, but instead selects phrases from the first four verses for inclusion here. You might expect this piece to roll out in regular four-bar phrases, but in fact they are six bar groupings. Generally neumatic, (meaning syllables happen every second beat), forward motion is always provided with quarter note movement in one voice or another, with many suspensions providing harmonic interest. This short movement is also in ABA form, with a shortened opening line repeated at the end as a coda. The B section recalls the theme from the first and second movements, before transforming into new material which will return later in movment six.

In contrast to Vivaldi’s Magnificat where this is the shortest movement (requiring a scant 30 seconds to perform), Trotta’s 10-min Fecit Potentiam is the longest movement of this work. We hear again the lyrical scalar theme from the first two movements, this time spiced up with a fiery ostinato in the strings. When the choir enters, they sing the descending bass line in octaves, then four parts, followed by the ascending scalar theme in unison then in parts. In the slower middle section, the second theme from the first movement returns in a lilting 12/8 meter. First introduced by the cello, the theme is soon picked up by the viola, the violins, the oboe, and the flute in turn, the latter two concluding with a brief duet. A slower, more contrapuntal section leads us to re-introduce the choir, who sing “Et Exsaltavit” in the same slow tempo, soon joined by a soaring soprano descant. But the choral part does not last long – another orchestral interlude transitions us back to the original key of a minor, where the trumpet and the horn are added to the galloping strings in a recapitulation of the opening material and a surprising pianissimo ending.

Trotta’s second textual insertion into the Magnificat is taken from Luke 1:38, which is Mary’s response to the Angel Gabriel at the Annunciation. (The Magnificat itself begins nine verses later). After a three-bar preface that ends in minor (connecting with the previous movement) and foretells the conclusion, listeners will recognize a theme that was first presented to them as “Et exsultavit” in the middle of the previous movement (with the same soprano descant). This short 48-bar movement, also in ABA form, is a somber a cappella respite between extended orchestral movements, completely tonal, with many suspensions and tasteful dissonances. This movement illustrates Trotta at his most emotional and effective writing; he excels at works for a cappella SATB choir (four-parts, with occasional divisi) and a soprano soloist (or descant above): several of his octavos are similarly scored, such as “Where Peace Has Always Been,” “I Shall See,” “O Gracious Light,” “Irish Blessing,” and “Ubi Caritas.”

It is not until the sixth movement that the baritone soloist appears, and has this movement entirely to himself, accompanied by the orchestra. The soloist is interrupted by two orchestral interludes: the first is the lyrical theme from the first, second, and fourth movements, and the second is the opening bars of movement three. Music theorists might also note that the baritone’s opening line here is built on a descending fourth, which is an inversion of the opening theme – that was our praises being lifted to God, this is God’s gifts to us. While the program lists only the baritone as a soloist, listen here too, for the French horn, who plays the same theme, and has almost as much of an instrumental solo.

The final movement opens with the same material as the first movement, rounding off everything to a close, but then surprisingly dives into a double fugue. Trotta remains true to a long compositional tradition here of writing a fugue on the words “Abraham et semini in secula,” but he outdoes himself here in writing one which works with itself – the second half of it can become a counter subject to the first half. Just as the fugue ends and you think the work was concluding, Trotta dives into a harp solo, using music from movement three as a ritornello, followed by the strings and woodwinds in turn. Then the lyrical theme returns, providing continuity in every movement. This time, however, the syncopated rhythm from the “Fecit Potentiam” is invigorated with sixteenth notes. An extended orchestral interlude transitions us into the final majestic “Gloria Patri.” You’ll recognize this music from the first movement: the “Magnificat!” has become “Gloria.” The musical connection amplifies the textual connection, as the two words mean the same thing. Thus, the last movement includes snippets from all previous movements and becomes a compendium of the themes that Trotta has used in this work. The lyrical theme returns for “sicut erat,” and the rousing final “Amen” is once again on the opening theme. Remember the first thing you hear in this piece, because you will hear it again at the end – the alpha and omega.

Trotta’s Magnificat is structured like a Bach cantata, with the largest movements being at the beginning, middle, and end, with pairs of smaller movements in between. Every second movement is in D major, and the alternate movements never stray far from sharps (D, A, D, a, D, f#, D). Trotta reserves the use of the orchestra for the Magnificat text itself: the two hymn interpolations are the unaccompanied movements. While scored for SATB choir, there is minimal divisi, only rarely splitting into 6 parts. In fact, the choir often sings in unison, and the orchestra does more than provide accompaniment. The repeated themes, recurring in every movement, give the work a remarkable degree of compositional unity; even the untrained listener can recognize the music that has been heard previously. These facts render Trotta’s Magnificat to be more easily learned, and eminently singable; it’s well written for the choirs that commissioned it – and also ensures a truly enjoyable experience for the listener.
Fans of Michael John Trotta will note the similarities between this composition and his “Septum Ultima Verba,” (Seven Last Words), which had its Carnegie Hall premiere under the baton of the composer in May of 2018. Both of these works: had multiple commissioning bodies; have soprano and baritone soloists, seven movements, and at least one a cappella movement; last about 40 minutes; include a fugue; are in Latin (with a singable English translation provided if desired); and represent all of the themes in the seventh movement.
With these two works, and three additional 15-minute multiple movement choral/orchestral works currently underway, Trotta is continuing to establish himself as one of the most prominent American composers of sacred music alive today. His adherence to tonality, tasteful use of dissonance and suspensions, setting of time-honored texts, and judicial use of musically historic forms such as the fugue, give his music wide appeal to both the connoisseur and those new to the genre alike.