Clinician, conductor, and composer Michael John Trotta is one of the bright young minds of modern choral music. His work has been performed at Carnegie Hall and featured at several national conferences, with recordings of his compositions broadcast worldwide. Pepper had the opportunity to sit down with Trotta to discuss his background, inspiration, views on education, and some of his most successful works. 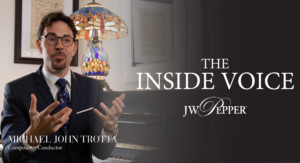 The son of a church soloist, Trotta was immersed in music at a young age. His high school choral teacher was an extremely talented pianist and singer named Loren Donley. From Donley, he learned a love for the musical craft. In this interview, Trotta remarks that he was unaware at the time how uncommonly talented his teacher really was. For him, learning the extent of his teacher’s skill drove home the idea that music is accessible to anyone with the determination to develop their craft.

Trotta attended Rowan University in the hopes of becoming a professional singer. At the same time, he played guitar in a blues band, further developing his skills. However, while studying at Rowan, Trotta was encouraged by many to consider pursuing music education along with vocal performance. He was eventually swayed and quickly fell in love with teaching.

His first teaching job was elementary music. He spent this time pushing a music cart around the building to K-6 classrooms teaching the fundamentals of music. After that, he spent five years teaching middle and high school choir. Trotta considers this an extremely valuable experience, as it allowed him to work with developing voices in several different ensembles. He worked with so many different groups, in fact, that each year he would pick out 40 different pieces for his students to perform. All the while, Trotta took what he learned and used it to create music that strives to make each singer feel that they had their own part.

Following his time as a choral music teacher in middle school and high school, Trotta went on to complete his graduate studies, earning a doctorate at Louisiana State University, studying with Ken Fulton. He taught at the collegiate level for five years before turning his attention to composition full time. Continue Reading at jwpepper.com

Check Out the interview at JW Pepper