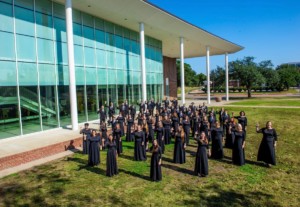 In anticipation of TMEA, we spoke with Jazmine Galan Fuentez, the Media Coordinator for the vocal division of the TAMUC Commerce Chorale, to learn about her experience of TAMUC’s role in commissioning Gloria, which will be premiered at TMEA Thursday, February 14, 2019.

Jazmine is a senior from Mesquite, Texas.  Aside from music, she is part of the Alpha Phi Sorority at Texas A&M University – Commerce.  Leadership roles she has taken within her sorority have inspired her to assume a similar leadership role within the Chorale.  She created the Media Coordinator role to alleviate some responsibilities from Dr. Hooper and figure out new ways to get them “on the map”.  She is happy to have the extra responsibility and to have the opportunity to work with Dr. Hooper, who she admires, calling him a “great director”. 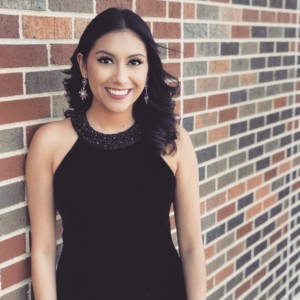 Jazmine will be pursuing a career as a music educator upon her graduation from Texas A&M University – Commerce and is proud to have been studying under Dr. Hooper during her time at TAMUC.

Jazmine sings with the Chorale as a Soprano I.  She is the Media Coordinator for the Vocal Division, and coordinates all media and public relations matters, as well as the Opera Ensemble productions.  Jazmine has been training sophomore Jordan Butler since Jordan was a freshman, so that she will be ready to take on the role once Jazmine graduates.  The two women run every aspect of media relations for the Chorale, and for any opera performances or a musicals they also have crew members working under their direction.

When asked what she is the most excited regarding the commission of Gloria, Jazmine shared she especially loves the text of this Gloria, specifically “how Dr. Trotta has arranged it”.  She was also excited when she found out Dr. Trotta would be flying out to Texas to work with the Chorale, adding, “he was a lot of fun”, and “it was refreshing to get his take on why he lined up the work” the way he did.  Jazmine stated, “his energy revitalized us and he was fun to have at our school”.  She and the rest of the Chorale enjoyed having him stay afterward as well to speak with students. 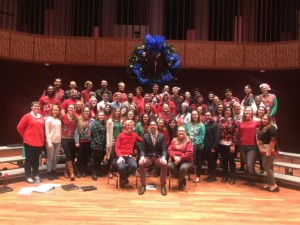 Jazmine’s favorite part of the work is movement II, which is titled, Domine Deus.  “I love the feeling I get when we sing the second movement”, Jazmine shared, adding that Soprano Michaella Prussak, “sings this movement so beautifully”.  Jazmine especially enjoys “how [Dr. Trotta] set up the second movement, it is very legato.  The way he wrote it, the way the text lines up is gorgeous.”  She also added, “The text is some of my favorite Gloria text”, specifically the text which to her translates as: “Thou who taketh away the sins of the world have mercy on us.  Receive our prayer:

When asked how the collaboration came to be, Jazmine explained that Dr. Randy Hooper and Dr. Michael John Trotta had known of each other from both having attended Louisiana State University at different times. Last year, they met up at TMEA, and began discussions of Dr. Hooper and his Chorale commissioning a piece to be composed by Dr. Trotta.  Since they had reconnected at TMEA, they thought it would be a great idea to have the commissioned work premiered at TMEA 2019! 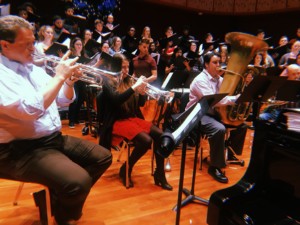 The Texas A&M Commerce Chorale has been perfecting its performance of Gloria since the school year began, early in the fall of 2018.  The Chorale will be performing the entire Gloria by memory and will be playing along with their brass and percussion sections. 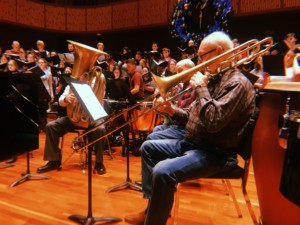 Dr. Hooper had wanted a centerpiece for TAMUC’s TMEA performance.  Gloria is in “the center” of what they are singing for TMEA, and “is a major work with brass and percussion”.  The concert performance is titled “Words”, which is appropriate, as Jazmine said, Gloria’s movement II, to her also means “becoming flesh”; this is the meaning that the Chorale wishes to convey to the audience.

IF YOU ARE ATTENDING TMEA, COME SEE THE TEXAS A&M COMMERCE CHORALE IN THE HEMISFAIR BALLROOM AT 8:00PM!

A new work for choir, brass, organ, and percussion, Michael John Trotta’s Gloria delivers a tapestry of melodic richness. A strong sense of architecture guides the listener through the three contrasting movements, full of triumphant drama. Trotta’s work is a rare example of music that is both grounded in tradition while looking forward, all the while appealing to the modern listener.

Like to take part in the next consortium?
Magnificat for Choir and Orchestra