This season features a collaboration with the Hilltop Church Mendham Oratorio Choir, led by Mr. James Wynne, Director of Music Ministries. The Hilltop Church, Mendham, NJ is participating in the work, and having it dedicated to him in honor of his 50 years of service as choir director and organist.

Michael John Trotta’s Magnificat is a 40-minute work for choir, soprano and bass soli, and orchestra. This seven-movement work delivers a tapestry of melodic richness that powerfully portrays the anticipation of the wonder and mystery of the birth of a savior. 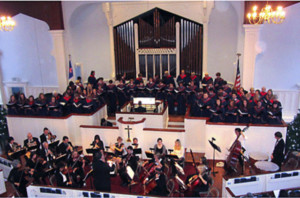 Since 1738, music has played an important and vital role in worship at Hilltop (Mendham, NJ).  The church has an excellent Sanctuary Choir and a Handbell Choir which can ring up to five octaves of bells.  There is a vibrant choral program for the children of the church, as well as a youth-run Praise Band.  The Hilltop Oratorio Choir is a blend of Sanctuary Choir members, as well as singers from the community and the surrounding area.

But it is the organ that makes the largest statement. Created from portions of an instrument built in 1971.  By the late 1990s it was clear that the instrument was in need of restoration. The organist at the time, Peter Pfunke, along with member Robert Willis, an electrical engineer, restored and enlarged the instrument – adding ranks of pipes, an antiphonal division in the balcony, and a solid-state console.  In 2014 the organ was enlarged again – this time adding a complete electronic division to the instrument.  The current instrument now stands at 39 pipe and digital ranks of pipes, 80 stops, and 2143 pipes.

James Wynne, the Director of Music Ministries, is a life-long music educator. A skilled organist, he received his B.A. from Montclair State University and then his Masters Degree from William Paterson University, going on to complete doctoral work at Boston University and to study organ with David Drinkwater.  He taught many different musical subjects in the Bergen County Technical Schools from 1973 until 1983.  He spent the remainder of his 45 year career teaching choral music and music technology at Jefferson Township High School.

Wynne began his church music career as a senior in high school in 1969.  He has enjoyed tenures as an organist/choir director in Hasbrouck Heights, River Edge, Pompton Lakes, Newton, Dover, Ridgewood – and now Mendham.  He is a recitalist, composer, arranger, conductor. He is also known for his skill as a lecturer on music and music history.  He is also currently working for Drew and William Paterson Universities as a Field Supervisor for emerging new music teachers. 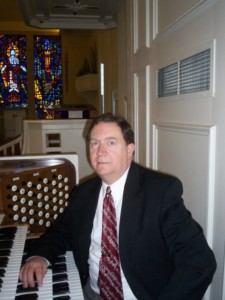 Commissioned by a consortium of 8 choirs for simultaneous nationwide premieres during the 2019-2020 season, Michael John Trotta’s Magnificat is a 40-minute work for choir, soprano and bass soli, and orchestra. This seven-movement setting delivers a tapestry of melodic richness that powerfully portrays the anticipation of the wonder and mystery of the birth of a savior.

Hear Samples and Get a Preview Score
Tell me more about your vision.

Tell me more about your vision.