This season features a collaboration with the The Memorial Presbyterian Church Chancel Choir, led by Ray McDonald, Director of Music and Organist.

Michael John Trotta’s Magnificat is a 40-minute work for choir, soprano and bass soli, and orchestra. This seven-movement work delivers a tapestry of melodic richness that powerfully portrays the anticipation of the wonder and mystery of the birth of a savior.

The Memorial Presbyterian Church Chancel Choir has a tradition of singing larger works with chamber orchestra twice each year during Advent and Lent. On Palm Sunday we have sung the Requiems of Faure’ and Rutter and the Dubois “Seven Last Words”. For the past two years, we have presented the Trotta “Seven Last Words”.

During Advent, we have sung the Magnificats of Vivaldi and Pergolesi, as well as Bach cantatas and settings of the Gloria. When I learned the Michael was composing a new setting of the Magnificat, I was excited and knew that I wanted to support it. I learned of the possibility of collaboration on the website and we are proud to be a part of it. Most exciting and unexpected is that Michael will be traveling to Florida and will conduct the premier at our church on the fourth Sunday of Advent, December 22, 2019.

Our choir of thirty has many singers who have been members for 25-30 years. We also have a number of younger voices, including church members and students and faculty from adjacent Flagler College. We are working diligently to learn the music and so grateful to be included as collaborators. 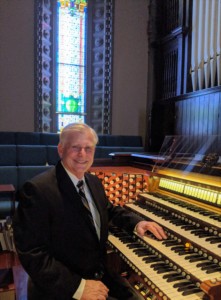 Ray McDonald has been a church organist since the age of 15, serving Baptist, Congregational, Episcopal, Lutheran, and Presbyterian congregations. He has served as Director of Music and Organist at Memorial Presbyterian Church in St. Augustine since 2006 after holding the position of Organist and Choir Director at St. Paul’s Episcopal Church in Jacksonville for twelve years.

After college, Ray worked as an apprentice at the Flentrop Organ Company in the Netherlands. He later received a B. S. degree in Mechanical Engineering from Georgia Tech and had a successful career as a manufacturing engineer with Johnson and Johnson. Combining his music and engineering skills, he managed the restoration of the Aeolian-Skinner pipe organ at Memorial Presbyterian Church, completed in 2012.

Commissioned by a consortium of 8 choirs for simultaneous nationwide premieres during the 2019-2020 season, Michael John Trotta’s Magnificat is a 40-minute work for choir, soprano and bass soli, and orchestra. This seven-movement setting delivers a tapestry of melodic richness that powerfully portrays the anticipation of the wonder and mystery of the birth of a savior.

Hear Samples and Get a Preview Score
Tell me more about your vision.

Tell me more about your vision.